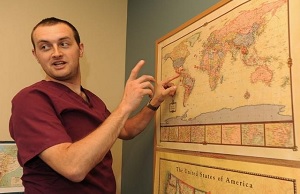 Loads of little pins were scattered, and sometimes clustered, in maps of 43 countries in Hodson’s office at the HealthFirst Family Care Center, where he works as a nurse practitioner.

Hodson said each pin represents his patients’ country of origin, but more than that, it represents their culture, their background and their health habits and disparities.

It’s a snapshot, not only of Hodson’s diverse patient base, but of Fall River.

“I noticed I had patients from all these countries,” Hodson said. “I just did it for fun.”

Hodson started his career at HealthFirst 11 months ago. A lover of history, travel and geography, he purchased a map and hung it on his wall. Since then, he’s been tracking where his patients come from and has learned a lot about the lives of each individual.

Hodson said some 40 percent of his patient base is Spanish-speaking.

Since he’s spent time in both Brazil and Argentina, and taught himself to speak Portuguese and Spanish while there, he’s become a welcomed sight to his patients.

“I went to Brazil two to the three times a year. I have friends there,” Hodson said. “I went to Argentina for six months.”

He can especially understand those from Columbia, Peru and Eduador.

“I’m not perfect,” he admitted.

When Hodson can’t understand the language well, like with those from the Dominican Republic and Puerto Rico, he uses a translator. There are four translators at HealthFirst.

Hodson has noticed some interesting things on how his patients’ health correlates with their native country.

Many of his patients from areas in Ecuador have never been examined by a primary care doctor, and many with vision problems have never seen an optometrist.

He saw a woman from Ecuador recently who suffered for years with pain from lifting 100 pounds of concrete on a donkey cart, and never had treatment.

Some patients from Cambodia suffered under the Khmer Rouge as slaves and have untreated depression and anxiety. One patient with chronic pain had been going through life with shrapnel in the leg since the 1990s.

Hodson has found that many people from Cape Verde are naturally immune to Hepatitis B. Those from Ecuador have vision issues because of a lack of access to eye doctors. Lyme disease is prevalent in Puerto Rico.

Hodson has also learned that a good number of people have moved to Massachusetts from Florida and other areas of the country to take advantage of the state’s Health Safety Net and have greater access to health care.

In Fall River, Hodson has seen a number of diseases that point to today’s societal ills.

He’s treated a number of patients with Hepatitis C, a viral infection of the liver caused by the transfer of blood including the sharing of needles.

He’s also seen a number of cases of H. Pylori, a bacterial infection of the intestines, that can spread in close living quarters.

Hodson said he’s treated about 10 cases of syphilis, a sexually transmitted disease, while in Fall River. Syphilis, which many people think no longer exists, starts as a sore and if untreated can affect the organs.

Since many of his patients are disadvantaged in some way, a big part of Hodson’s job is to familiarize them with available services at HealthFirst and on their health in general.

He teaches patients about the importance of vaccines, exercise and nutrition, and sets them up with dental care, eye exams, blood work and specialty services, like gynecological care or x-rays if needed.

Most of his patients live in greater Fall River, but there are a good number who travel to the community clinic to take advantage of HealthFirst’s one-stop shopping.

“I have patients that come from as far as Framingham,” Hodson said. “They like the quality of the care here.”

Hodson said he enjoys working as a nurse practitioner, and especially in a community clinic.

“You’ll learn something new every hour,” he said. “I like having the ability to care for the whole person.”